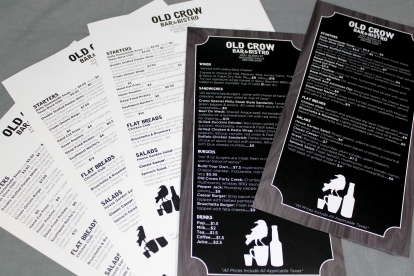 After selling the Hard Luck Bar, one of Toronto’s premier music venues, Darren made his way to Niagara Falls. It was there that he started a Bistro by the name of Old Crow.

Familiar with my work on gig posters from his days at the Hard Luck, Darren approached me about branding his new business. Darren had a basic idea of what he wanted in terms of the look and feel. In lieu of a creative brief we had a few phone conversations where we threw some ideas around. We both agreed on Black & White with no colors.

The concept came about rather quickly. During our phone calls I sketched out a few quick ideas. One was a crow perched on of a coffee mug. I immediately began building the design on Illustrator. It turned out to be one of the most fun logo’s I’ve ever created.

The beer bottle and shot glass were added once we had the basic logo down. Originally the concept was only coffee, but as Darren was working out the details of his menu he decided that alcohol was going to play a larger role than he had originally thought. Adding the Beer bottle and shot glass made so much more sense aesthetically. The logo truly came alive after that final change.

EARLY DRAFTS OF THE CROW ON THE MUG.

Once the logo was completed we moved on to menus and signage. It was soon after that the Darren has his grand opening.

Old Crow is located at 4337 Queen Street in Niagara Falls Ontario. You can check them out on facebook as well.